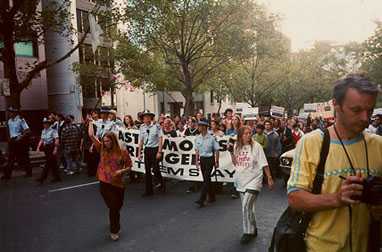 Some people do protest songs. I draw comics.
I drew East Timor Funnies in 1996. When some of the Melbourne cartoonist folks got together for one of our frequent 24 hour 'draw or die' sessions, I knew no one else would attempt such an off-beat subject.
Small press comics often have an involuted sensibility that seems to largely result in hipster lifestyle critiques. I thought it would be good to have that same sarcasm and scrutiny focused on something else for a change, something with a little more substance. And I did it fast to force myself to do it.
Fellow scribbler Angelo Madrid kicked in the back cover, and the rest was inked on the tram over to the Asia-Pacific Anti-Militarism conference, where I hijacked a photocopier and premiered it. There it sold with other activist works by locals Q-Ray and Athonk. The response was overwhelmingly positive. I sold it in comics shops, record stores, and at a few protests. It was republished in 1997 by Melbourne University's student paper Farrago.
Now it's 1999 and Dili is burning. I'm staying up late again, hastily preparing the web version of my comic. I still don't have the time to do a proper discussion of the issue; some things never change. The internet is good for an immediate response, but its quicksilver reflection of events is virtual, ephemeral -- and this problem has been simmering for years. But heres my own little effort to point you in the direction of doing something.
I became acquainted with the issue as a grad student of Southeast Asian Studies at Melbourne's Monash University. East Timor seemed obscure and remote when viewed from my home in the United States, but it's right next door to Australia. There were frequent protests and demonstrations regarding the issue during my time in Oz, some photos of which you can see here. 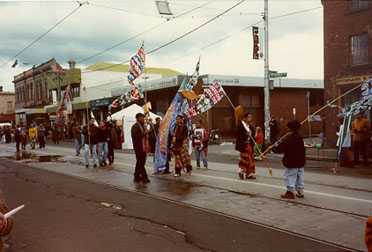 Australia has had friendly relations with Timor in the past - during World War II the Timorese helped Australian troops, and took heavy losses when the island was occupied by the Japanese.
Indonesians invaded this former Portugese colony in 1975, with tacit approval from Australia and the USA. Australia became the only Western country to recognize the invasion as legit - and promptly inked an agreement with the conquerors to divide the spoils from the oil-rich Timor Gap.
That's what it's about, basically: money. East Timor is rich in oil and other natural resources. And the major businesses in East Timor coincidentally happen to be owned by the families of the military leaders running the province.
Since the invasion, the Timorese have suffered under repressive policies that are likened to genocide - the highest number of deaths proportional to population in an ethnic group since World War II. And it's been done with American weapons, while its neighbor Australia averted its gaze. Not only have the two countries done their best to ignore this issue, they've actually done joint exercises with the Indonesian armed forces. The only voices of dissent have been the occasional activist or academic. 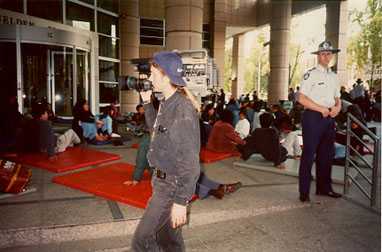 Indonesias government has been run by a military strongman, Suharto, for decades in an atmosphere of corruption that is the dictionary definition of 'nepotism'. When the recent Asian economic crisis galvanized the reformasi movement, he stepped aside for a crony, (the US-educated BJ Habibie), who called for an East Timorese independence vote as one of a few grudging concessions to the groundswell of opposition.
By now you all know the result. Militas composed of thugs linked to the Indonesian armed forces have looted and destroyed all the infrastructure they can. The East Timorese that haven't been outright massacred have been herded to West Timor. There they'll face further assaults by the military and militias, and ultimately dispersed throughout the archipelago, destroyed as a people and culture. Why? It's a message to other troublesome provinces like Aceh and West Papua. Try to break free, and you'll get the same treatment. A newly independent country is seen by the powers that be as destabilizing to the current order.
In a way, there's some similarity to Rwanda: the attack was planned to happen fast, before international public pressure would cause the UN to respond. And in both cases governments had wind of it, and did nothing. Unlike Europe, NATO isn't going to bomb Jakarta.
Now a peacekeeping force has landed.  Problem's solved, right?
Hardly. There's a tremendous need for aid of all kinds - basically rebuilding the entire country.  East Timorese are still being killed in large numbers in their West Timor camps. It's not about just East Timor anymore, it's the Timor crisis.
You've seen my little effort here, maybe you can pitch in too. Click on these links if you want to demonstrate, donate, boycott, harass your local representative or employ your artistic talents.(And even if you're lazy I've got a page for the Armchair Activist.) We need to pressure the Indonesian government, we need to send aid, we need to call for a war crimes tribunal, we need to extend the peacekeeping mandate to the whole island of Timor.


News & Analysis
The mainstream media has ignored this issue for years, which is one reason to vary your media diet. Nowadays, most Australian newspapers like The Age, and The Australian, and the Sydney Morning Herald have East Timor Archives. The Australian (public) Broadcasting Corporation also has an extensive Timor news site . For  immediate updates, try the email lists reg.timor, aus4freetimor, or asiet-l.
For  Timor analysis you might try a quick look at Mother Jones, the huge resources of ZNet, or Green Left Weekly's Timor issue.
Other resources worth a look are the BBC's site and the growing number of documentaries.

East Timor Groups
The International Federation for East Timor site has lots of news and info. The Stateside branch of this umbrella group is East Timor Action Network, which maintains a regularly updated site with lots of activist information.
For Australians, Action in Solidarity with East Timor has been one of the focal points.  Theres also a site set up specifically for actions and breaking news, freetimor.com.  If you are looking for some background information on the whole crisis, try the East Timor Human Rights Centre, East Timor Relief Association, or the multilingual resources on the Portugese student Timornet site.

Click here for more information on military ties, women in East Timor, and arts for Timor

Transparency Project - wow- note where Indonesia is on the corruption index!
http://www.transparency.de/documents/cpi/index.html

Back To QuickDraw        Back To East Timor Funnies

Thanks to the charming and talented Barbara Kerr for web hosting and all around technical support.
See her own efforts at http://www.geocities.com/SoHo/Nook/3508/